Weekend + a couple of pictures

Hope everyone had a nice weekend! I was so jet-lagged and loopy on Friday, I stayed home that evening, but went to John’s yesterday morning instead. It was fun to catch him up on all the adventures and stories. He was enjoying it all and kept asking for more. Poor baby had dental work done, so he was in a fair amount of discomfort; I’m glad I could distract him. Still has the rash, but says the itching is lessening slowly. I so want him to feel good again…

Sheesh! I take a few days off from blogging and my stats plunge. Ah well, I guess if you don’t write, people don’t come, ’cause there’s nothing new to read. OK, I’ll do my best to get the interest back up again. How about a couple more pictures from last week?

These are from the snotty waitress scenario — Paul the annoyed customer taking me to task:

This one is from the “hooker” shoot — can you believe those handprints??

Paul had a case of dry skin happening on his right palm on Wednesday; I offered him some lotion, and he scoffed, “Nah, I don’t want to smell like a girl.” Men! So he kept on going, and when we wrapped, his skin had broken in about six places, tiny little splits. 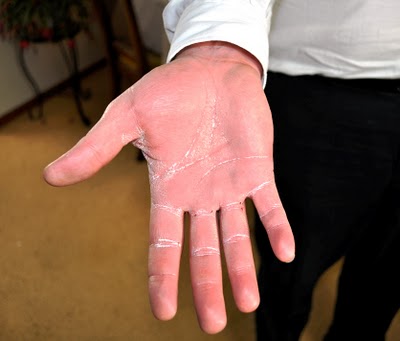 Ouch! See the little cuts at the base of his fingers? So there were K and Sarah, fussing over him, asking if he was OK, offering him skin balm, ice, etc. Hello?? Sore butt over here! 😀

I have several photos of Sarah and me, and of the three of us, but I want to run them by Sarah first to make sure she’s OK with my posting them.

Meanwhile, New Guy is coming over tomorrow; it’s been two weeks and he says his hand is itching for some action. I seem to be fully recovered, except I have a bit of “sandpaper butt.” So I’m loading up with Gold Bond Mega-Ultra-Healing cream. I missed him!

Back to the gym tomorrow too, after not going for a week. Can’t say I missed that. Some day they’ll invent a pill we can take that will tone our muscles while we sprawl on the couch watching trash TV and eating peanut-butter Oreos.

Well, it’s a nice dream, anyway. Right up there with finding an anti-wrinkle cream that does everything its ads promise. You know it doesn’t really exist, but you still keep hoping!

Back tomorrow to report on the Monday evening festivities. 😀

21 thoughts on “Weekend + a couple of pictures”