If spanking’s stress-release properties could be bottled as a drug, that could be its commercial name. I almost always want spanking, but sometimes, I really, really, really freaking NEED it. Crave it soul-deep. Tonight was one of those times.

I love John, truly I do. His family? Notsomuch, as most of you know by now. Are they rude to me? No, they’re perfectly pleasant to me, most of the time. It’s John they aren’t so nice to. He’s always been the picked-on one in the family — first because he was the youngest, and then later simply because he’s different from them. (and thank God for that)

But oh, when they need something? An able body to help move things? Or, more often, money? Then he’s Johnny the Cash Cow! And what drives me absolutely spitting insane is that no matter what they ask of him, he does it. He has this blind familial loyalty, and they don’t deserve it.

So when he told me that his eldest sister wanted to meet with him Sunday morning, my first thought was, “What does she want?” And sure enough… “We need to talk about Mom.” Their 84-year-old mother still lives in her own apartment, with the siblings taking turns visiting, taking her out, etc., and some hired help coming during the week to do things for her. But she’s getting too addled to live on her own.

One plan was for John’s brother, sister-in-law and nephew to take her in. However, they’d need a bigger house. And that’s where John comes in, of course. To chip in his healthy share of the down payment, because he makes more money than the other three. Mom has a good chunk of liquid cash, but not enough.

“I’ll have equity in the house,” he said. “You already have a house,” I pointed out. “You don’t need their damn equity.” Yeah, he makes good money. But he’s going to need that money, for when he has to retire early and have open heart surgery. And I guaran-damn-tee none of his family will be around when HE’s in need.

So, I was pissed, I admit it. I get so frustrated at his willingness to always help people who aren’t particularly nice to him. Blood, shmud. I hate seeing him taken advantage of. Whenever one of his sisters says something snarky about him to me, I silently grit my teeth. “We think you’re a saint for putting up with him.” Well, I think he’s the saint for living with you guys all those years and not putting arsenic in your Wheaties.

And where exactly will this new house be? If John’s sister has her way, it will be right near HER, for her convenience. However, John’s mom now lives five minutes from John, and it’s easy for us to pick her up each Saturday for lunch. When she’s farther away, are we still going to have to take her out every damn week? I’m not all that crazy about it now. I don’t see my own mother, for God’s sake. And when I did, it was once every couple of months, not every week. Yeah, I know. Stop borrowing trouble.

But I was tense about it yesterday, and to my chagrin, found I was still angry about it today. By the time ST got here, I was ready to ask him, “Please, be extra dominant tonight. I need it.” But instead, I just came right out and told him I was in a MOOD, and why. And I spared no expletives or unpleasant rhetoric. Yes, I can be a right bitch sometimes.

Did I get a sympathetic ear?? Noooooooooooooooo! OK, OK, maybe at first. But then he said I needed a damn good spanking for being so crabby and saying those things. “That’s not fair!” I snapped. “I didn’t say this stuff to John! I’m saying it to you! Aren’t I allowed to have a confidante?”

“Yes,” he said, “and I’m confidante that you’re getting a spanking!”

Again with the heavy artillery again tonight, not much hand. But it’s fine; I wanted it. I kicked and squirmed, but still raised upward for more.

Candid shot he snuck in of my face; what was I doing, biting my knuckle?

He was laying it on me so hard tonight, he actually let me rub. He usually doesn’t, the big meanie-face.

The anger flew out of my pores. I made furious sounds, I pounded the bed and glared ferociously at him. He responded by firmly pushing down on the small of my back or gripping my hair. He wasn’t going to let me get away with any of my crap, and I wouldn’t have wanted him to.

He was giving me exactly what I needed, and he knew it. 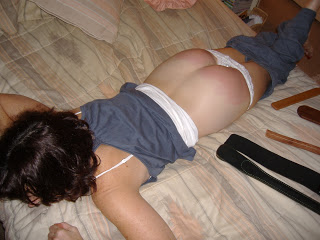 He prevailed, of course. As it should be. I calmed down, stopped fighting, absorbed it with deep breaths and focus.

A non-candid face shot — yow. Good thing he’s thick-skinned, huh? One might think I hate his guts or something. 🙂 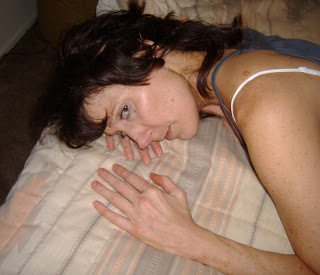 Afterward? Wonderfully, blissfully relaxed. I could have fallen asleep snuggled in his arms. Peacefully happy, smiling, practically purring. He came in to a porcupine and left a kitten.

John and I are OK, by the way. He was even joking with me during brunch yesterday. “So, let me make sure we’re clear, sweetie,” he said, cutting a forkful of his omelet. “The idea of moving you and Mom into my house, so you could take care of her during the week while I’m at work, isn’t an option?” I smiled at him and didn’t reply. Instead, I picked up my knife and pretended to cut my wrist.

ST, you are the absolute best. Thank you, my confidante. 🙂