All over the map on Sunday night

Not literally. I’m home and it’s rather cozy and quiet in here, with the heater going to combat the chill from outdoors. My mind is wandering, however, as it does often.

On Thursday night, John was walking down the street in the dark, and didn’t see a coil of wire lying on the ground. In a freakish accident, he stepped on the wire and it sprang up, tangling itself around his feet. He went down hard, bearing his full weight onto his right knee. He’d put his hands out and both got scraped/bruised, but the impact was on the knee.

Friday, I was distracted and worried about him and had a crappy day. Capped it off by misjudging the distance from the wall while exiting my garage space. I’ve lived in this apartment for nearly 21 years and have never done that… until now. Scraped up the driver’s side of my car. It was dark and I was disoriented, and the sound was awful; I made it worse by trying to extricate myself. Ugh. Finally got onto the freeway — and landed in the midst of a Sig-Alert from a very bad wreck. Took me 1 hour and 40 minutes to get to John’s, normally about a 50- to 60-minute drive. By the time I got there, I was not a happy camper. And John’s knee was the size of a cantaloupe. It didn’t even look like a knee. Poor baby. He’d been icing it; he said it was even worse before.

So we spent most of the weekend home, parked on the couch and watching stuff, elevating and icing John’s knee. By today, it was starting to resemble a human knee once again, and he said he could feel his kneecap (which he hadn’t been able to do for two days). Icepacks are wonderful things. When we went out to eat, we made sure to get booths so he could prop his foot up on the opposite seat. He wasn’t in much pain, but every time he stood upright or kept his leg down, the damn thing would swell. He promised me he’ll take it easy this week at work.

Got home late this afternoon. A couple of scene friends are in town for a few days and one of them had messaged me about a spanking party they were going to this evening, saying John and I were welcome to come and if we wanted to, just text him and he’d send the address. Well, of course John was out, but I could have gone. If I were a different sort of person, that is — more spontaneous. But I can’t do anything last-minute to save my life, even if it’s something I’d enjoy. Here I was, in sweats with grubby hair and no makeup, feeling kind of sleepy and glad to be home, and the thought of jumping in the shower, washing my hair and blowing it out, putting on makeup, dressing up and driving somewhere in the Hollywood Hills sounded about as probable as flapping my arms and flying to the moon. (sigh) I am who I am. Would have liked to be there, though. But I don’t think I would have had as much fun without John, anyway. I don’t like going to things alone. I did enough of that in my earlier years to last a lifetime.

I confess, I was bamboozled by the reactions to the photos I posted in the last blog. I’d expected that everyone would laugh with me and tactfully agree that yes, I looked hideous. Instead, one after another, you all said the opposite. So I wondered, just what the hell happened? Had I imagined it all? All the ridicule, the insults, the teasing, the unkind names, the snubbing? If I wasn’t that horrible looking, why was everyone, including my own family, so damned mean?

I talked about it with John; he said it probably wasn’t so much about how I looked, but what kind of vibes I put out. Very good point. I had no confidence, I was shy and awkward, desperately wanted to be accepted and popular, and that hunger and vulnerability rose off me like an unwelcome stench. I was wide open for being picked on, and when I overreacted to it, I invited more.

Being hypersensitive is not an asset, sometimes. What he said made sense. Add to that growing up in a Hollywood family in Beverly Hills; I was held to a ridiculously high standard. But perhaps if I’d had a confident, outgoing personality, a relaxed demeanor, instead of being this uptight, frightened little mouse, people would have overlooked the baby fat, the braces and the kinky hair.

Doesn’t really matter, I guess. It was what it was. Everyone who posted nice comments, thank you. They all came as a shock, but I appreciate them.

Trust me on this, though; I was somewhat overweight. No, not morbidly obese. But y’all have seen me for years; you’re used to seeing my body a certain way, the way it’s been for a long time. Now picture it packing on another 35 pounds. Again, not obese, but definitely an Erica you wouldn’t recognize. One who wore clothes that were several sizes larger.

Can you stand one more picture? This will surely crack you up; it’s a 70s relic. In 1971-72, I used to hang out at a rec center in a nearby park, shooting pool, watching movies they screened, etc. On my 14th birthday, the gang there gave me a goofy card they’d drawn up and signed. On the front, someone had drawn a girl’s body in a crop top and bell-bottom pants, and then they’d found a picture of me somewhere, cut off the head and shoulders and pasted it on top of the drawing. I just found that old card in a drawer a couple of days ago. Ready? 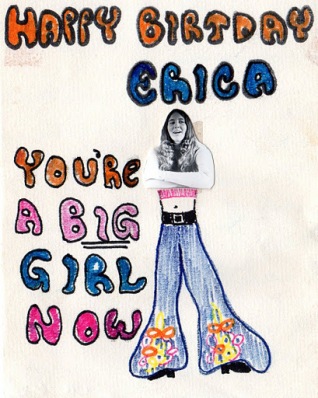 Happy BIRTDAY, indeed. And yes, I was a BIG girl. Here’s a close-up of that top portion:

Ye gods. Come on, you can say it, that’s a chunky face. I won’t get mad. 🙂 Jeeez, who would have thought I’d look so much better a full 40 years later?? LOL

Hope everyone had a nice weekend.

14 thoughts on “All over the map on Sunday night”