Next time, look under the bed, dumbass

Last time ST was here, we played in the bedroom and he had me get the Cane-iac Spanking Buddy out of my vanity drawer. Even though I had given it to him as a gift, he likes me to keep it here. So after he left, I looked on the bed and on the floor, but couldn’t find it. I figured he’d accidentally picked it up with all his other toys and put it in his bag.

Tonight when we were ready to play, I mentioned that he might have the SB in his bag, because I thought he took it by accident. He rummaged through everything — “Nope, I don’t have it.” Hmmmm… Oh, wait! Maybe it had traveled under the bed somehow (no, I didn’t put it there).

Off I went to the bedroom to look, and sure enough, it was way under the bed. You wouldn’t believe the noise I got from ST when I came back.

“Aha! You had it all along, and you accused me of stealing it!”

“I did not!” I protested. “I said you might have taken it by accident!”

“You were still blaming me, and all the while it was just your lousy housekeeping!”

I beg your pardon??

“You really shouldn’t accuse me of stealing,” he scolded, pulling me OTK.

“Dammit! There was nothing accusatory about what I said!” I hollered.

“Yeah, well, I’m about to get abuse-atory on your bottom.” (groan) Oh, clever man.

We were both chatty at first, him blathering some nonsense about “poor Erica” and how I get blamed for doing things I didn’t do, because I’m a perfect angel all the time. (Well, at least he’s finally seeing that.) He said we should shoot a series caled “Poor Erica,” and with each installment, I’d get some sort of unfair punishment. Sounds like Monday nights to me! (snort)

“So what scenarios should we use?” he asked.

“I dunno,” I muttered. “Some of your lame-ass flimsy reasons, I guess.”

“You’re really not in a position to be making comments like that, are you?” (Well, no. But when has that ever stopped me?) I insisted that it was true, that he came up with the damndest reasons.

“That’s just superior top logic in operation,” he claimed. I said that was an oxymoron. He didn’t like that either.

“Yes, I know what it is,” he said. “But it still sounds like it should be the name of an infomercial or something. Doing Laundry with OxyClean for Dummies.”

Jesus. Who put a quarter in him tonight?

By the way, here I am, playing the cheerful hostess and offering up the Spanking Buddy. 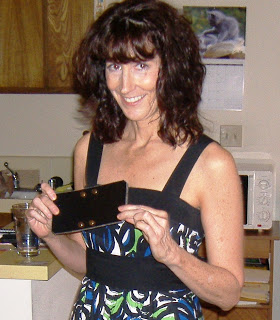 He liked how my panties tangled up on my feet and legs when I kicked. Said it was a good leg toner, using my panties like an exercise band. He should start his own gym and teach his own exercises.

All this jocularity was very well and good, but when he moved me to the ottoman, things began to transition. We got quieter and more focused, and he ramped things up.

No tears tonight. I wasn’t feeling the need for emotional release. But I went so deeply into subspace, I couldn’t speak any more. I heard incoherent noises… moans, groans, sighs, whimpers. Dreamily, I wondered where they came from, and realized they were my own.

It was an all-leather night, except for the final 10, much later, with the wooden paddle. He didn’t ask me to count them, as he usually does. He knew I wouldn’t be able to. I could barely take them, they hurt so much, and I shrieked into my pillow. And when they were over, I melted bonelessly into the cushions.

I didn’t say anything for a long time. I didn’t think about anything, either. My head felt refreshingly clean and clear, the usual nattering at bay. I could have shut my eyes and drifted to sleep, as he curled up next to me and stroked my back, my hair. When I finally spoke, my first slurred words were, “Can I slip into something more comfortable…like a coma?”

Ever want to freeze a moment in time? A moment when you feel so utterly right, so blissful and and at peace, you want to capture it and lose yourself in it?

Eventually, I know I have to raise my head, open my eyes, push my hair out of my face. But I put it off as long as possible. Fortunately, ST is patient. He waits. He soothes, and he waits.

We ended the evening by watching some SNL skits on Hulu. He’d never seen their parodies of the Lawrence Welk show, which are hysterical. You can’t fully appreciate them unless you grew up with that stupid show, which we both did.

I am particularly sore tonight, squirming in my computer chair. Not complaining, however. It’s the good pain. 🙂 I’m in my happy place.

17 thoughts on “Next time, look under the bed, dumbass”