One of my favorite actresses (and her one-smacker)

I’ve been watching a lot of AntennaTV and MeTV lately; two cable stations that rerun classic television shows. Because I have older tube TVs, I can’t stream Netflix, and I don’t get premium cable channels, so when the networks are running repeats, I fall back on the oldies, some of which I never get tired of watching.

To most, the name “Elizabeth Montgomery” conjures up the 60s sitcom Bewitched, for which she was best known. But Ms. Montgomery was far more than Samantha Stephens, even though that character was indelible. She was also a brilliant dramatic actress.

Oh, and I thought she was absolutely stunning:

Her career began in the mid 1950s, and in the late 50s and early 60s, she appeared on many dramas, including Twilight Zone, Alfred Hitchcock Presents, Wagon Train, and One Step Beyond. The other night, I caught her on an episode of The Untouchables, for which she’d been nominated for an Emmy. She played Southern spitfire Rusty Heller, a prostitute who got mixed up with some very bad men. I loved how sassy she was (“Now don’t you go trying to appeal to my sense of decency, sugar, ’cause I ain’t got one”), and it was quite surreal watching her make out with co-star David White, who later played Larry Tate (Samantha’s husband’s boss) on Bewitched.

He ended up shooting and killing her, the big meanie. Of course, that was after she ratted him out to the mob and watched one of the bigwigs cut out his tongue. (No, they didn’t show it. In 1960s TV, things were strongly implied, but left to your imagination.) And as she died in Eliot Ness’s arms, the last thing she asked was “Is my lipstick still on?”

It was an interesting twist for her, moving into a sitcom, but Bewitched ran from 1964-72 and became an iconic show. There were two Darrins, two Louise Tates, two Frank Stephenses, two Gladys Kravitzes, but only one Samantha, brilliantly played and much beloved.

So, since this was pre-PC TV and Samantha often got into mischief (as did her identical cousin, Serena, also played by Ms. Montgomery), was there any spanking? Sadly, no, not really. However, there were two shows with a single smack.

In the more popular of the two, from 1967, Serena pretends to be Samantha and torments Darrin all afternoon. He finally catches on and plots revenge, but doesn’t realize that the real Samantha has come home. When she bends forward to pick up something she dropped, he gives her one good smack on her behind. I don’t like this scene, because right after that, he hits her in the face with the pie she brought home, and it all devolves into a big pie fight. And since messy humor grosses me out, that wrecks the scene for me.

But a lesser-known scene is the one I find far more charming and sexy. It’s from 1964, and (I think? not sure) it’s the first appearance of the Serena character. She tries to fool Darrin into giving her a kiss, and his reaction is deliciously appropriate. I don’t seem to be able to embed this, so you can watch the clip here (sorry about the German commercials!)

After Bewitched ended, Elizabeth went back to her roots, starring in dramas such as A Case of Rape and Lizzie Borden. She was nominated for Emmys and Golden Globes throughout her career, but never won. In 1995, she passed away from cancer at age 62.

In case you may be wondering — no, I never met her, and as far as I know, my father never worked with her. Although I’m sure their paths crossed at some point, since she was married to TV writer/producer William Asher for 10 years. 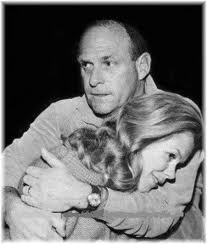 Many of her dramatic appearances are available on YouTube. I love finding TV treasures on YouTube — full uncut versions, no commercials! For example, her appearance on The Untouchables is here.

No stress release for me this week. 😦 Hoping to get some work I can bury myself in.