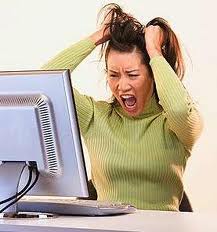 I try, kids. I really, really do. But every now and then, something so profoundly upsets me, I just have to get it off my chest.

This week on FetLife, I reposted an old piece of writing from about five years ago, a tongue-in-cheek PSA about “proper behavior during a spanking.” When I’d originally posted it, FetLife was fairly new, and I had a lot of friends who hadn’t seen it, so I bumped it back up into the feed.

Wow. I didn’t expect to see such an explosion of appreciation. To date, it has 1,171 “Loves,” hundreds of comments, and it made the top tier of the Kinky & Popular page. Very gratifying.

As is often the case when one posts something well-liked on Fet, one gets a flurry of new friend requests. And as always, if I don’t recognize the name, I go look at the profile.

Yesterday, I got one such request. The user name, which I won’t repeat here, raised red flags immediately, but I went to look anyway. And then I read the profile of a man that was filled with misogynistic, hateful, degrading rhetoric. It went way beyond male dominant/female submissive descriptions — basically, it was a treatise on how women are worthless scum, here solely for his entertainment.

Want an example? Here you go.

When a pet pushes herself to earn my favor, I can get to care and see after her… but that won’t stop me from treating her like dirt I scrape from my shoe, or make her lick said filth from my boot if the mood strikes me, so don’t ever hold your breath for me to show my “appreciation” towards you.
It’ll probably come in the shape of a slap and harsh hair pulling, maybe even spit on your face and smear it with my hand to ruin your makeup you put very carefully to look so sexy mmmh… just for me to make you end up looking like a cheap disgraceful whore, with tears and cum running down your cheeks along with your expensive mascara {evil smile}.

His photos weren’t much better. One had a naked woman crawling next to a dog cage, wearing a butt plug attached to a length of chain, which he had in his hand, and he was ordering her back in the cage. The caption: “Who let the sluts out?”

Yeah, I know. Some women like this. Some people get off on this.  My question is: Why the hell did this guy send me a friend request? Did he not read my profile? Was there anything in there that even hinted that I like to play this way?

Oh, and regarding the comments on my writing — 99% of them were positive, and recognized the piece for what it was: humor. But the occasional Uber-Dom had to drop by and spew testosterone, talking about what should be done with me. One guy said I sounded like a PITA brat. (That’s Pain In The Ass, y’all.) Oh yeah? Well, you sound like a PITA top, pal. Fuck off.

And then there was this guy:

Mmm… good way to find yourself bound, imobilised and gagged.
By all means scream and kick and fight – Im bigger, meaner and a sadist – go right ahead, you`ll wear yourself out before Im even out of breath.

Um… no. I won’t. Because I would never bother engaging with the likes of you. Not just because you’re too full of yourself, but you’re too stupid to know that “Im” is not a word.

Argh. I guess this entry turned into a sort of CHoS, huh? So much for post-scene tranquility. I think I’m ready for Steve again.