You guys have heard me bitch about annoying people at the gym before, so this is nothing new. The beefy grunters who, every time they hoist a weight the size of a small car, let out a roar that sounds like they’re giving birth. The chatters who yammer on the phone while they’re working out, and don’t have indoor voices. And one of my favorites: the texters who use gym equipment as if it were their living room furniture.

Last week, I waited for 20 — that’s twenty — minutes for the quad machine while a woman sat on it and texted. I was this close to going to get a manager to haul her ass off of there, when she finally picked herself up and moved to another machine, where she continued her texting. Must have been some conversation. Jeez, lady. Why don’t you save the money you spend on your gym membership and go park your butt at Starbucks instead?

But today took the cake. A young woman was draped over the hamstring curl machine. For those of you unfamiliar with gym equipment, the hamstring apparatus looks like something you could find at a spanking party or in a dungeon. 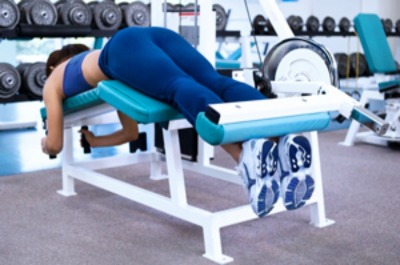 You lie on this doohickey, put your feet under the platform, then curl your feet up toward your butt — this exercises the muscle that runs down the back of your legs. It also makes your bottom look really, really nice.

However, this woman was not curling anything. She had herself in position, with her perky little butt, clad in tight shorts that barely cleared her sit spots, but she wasn’t gripping those handles you see up front. No, she was propped up on her elbows (which arched her back, making that perky butt stick up even more), and she was busily texting.

I did my circuit, and every time I finished one machine and moved to the next, I glanced back over. Yup, she was still there. If anyone wanted to use that machine, they were SOL. She had claimed it, and was completely oblivious to anyone who might have been waiting for it. Several minutes passed; I thought, “She has to get up sooner or later.” Turned out, it was much later.

If she had any thought process at all, I’m sure it went something like this: “Look at meeeee… I’m so cute, and my butt is so perfectly perky, that I can get away with hogging this equipment while I exercise my manicured li’l fingers, and y’all can just wait for me, K?” But I doubt she was thinking anything at all. She was just clueless.

Here’s what I would have enjoyed: If one of the hunky trainers sauntered over, positioned himself behind her, and gave that perky butt a mighty, resounding SMACK, loud enough to make everyone stop what they’re doing and look. She’d jerk upward, her phone would go flying, and she’d turn her big indignant eyes on her perpetrator, who would calmly smile and say, “Use it or get off it, princess.” And the entire gym would cheer.