You know, I was thinking about writing a Very Important Scene Post about consent, and what constitutes consent violation. However, I really don’t feel like putting up a controversial post and then going away for the weekend, so it will have to wait. Or maybe I’ll change my mind and not post it at all. Depends on how nervy I’m feeling.

So it’s been a month. As I’ve mentioned before, I really didn’t have any idea how just how lengthy and complex this healing process was going to be. Now I’m a bit more realistic and know that, although I am functional now, it’s going to take at least three months, and probably more like six months to a year, before I feel and look fully normal. So I’ve had to come to a new level of acceptance, and I think I’m finally starting to achieve it. It helped seeing my doctor AND my therapist this week. Especially since the latter had a facelift herself, so she could give me the lowdown about healing and what to expect. It certainly didn’t hurt that she thought I looked fabulous. She’s known me for 22 years, and one thing she kept saying over and over was, “You still look like Erica.” In other words, I don’t look fake or drastically altered. That was good to hear.

I’ll get the requisite gripes out of the way — my right eyebrow is still frozen, and I have no timeline of when it will come back. But my doctor told me that in over 25 years, he’s never heard of this sort of thing NOT reversing, so I just have to be patient. Ditto with the hair shedding, which still freaks me out. I have been taking lots of biotin, a vitamin that is supposed to be good for the hair. And I’m not exactly going bald.

I am still a scabby mess behind my ears and into the hairline. ‘Nuff said on that. But that will pass. My ears hurt a lot and I can’t talk on the phone for more than a few minutes, since holding the phone to my ear is painful. But I hate the phone anyway.

My neck looks like a ligature scene gone bad. But that will pass as well. It’s only been a month, Erica!!

The GOOD news? My smile is returning, bit by bit. The sides of my face, particularly the right side, are still a bit like a brick wall, but it’s slowly softening and my smile is widening a bit. Today when I went to get gas, I smiled at the cashier, and a man standing off to the side said to me, “It always impresses me when people come into a room with a nice smile, and you’re the winner for today!” That random and unsolicited compliment cheered me immensely.

I can exercise again! I mean, I can’t run a marathon, but I never could anyway. But I can sweat and puff and work a bit, slowly. I have to build back up to it, but I’ve already been doing some light workouts the past two weeks, so it won’t be a complete shock. Maybe I’ll even go to the gym on Monday.

Yesterday was the first day in a month that I didn’t take any kind of pain medication all day. 🙂  So far today, I haven’t either.

Tonight, for the first time since the surgery, I put on a bit of makeup and blow-dried my hair. It felt a bit weird on my scalp, because of all the healing going on, so I used the diffuser and a warm, not hot, setting. It’s nice to see my hair again; it’s been hidden under a bandanna this whole time.

My therapist says I’m going to feel very confident and empowered when this is over. I want to believe her. In the meantime, I will act as if I do, fake it till I make it. Patience. 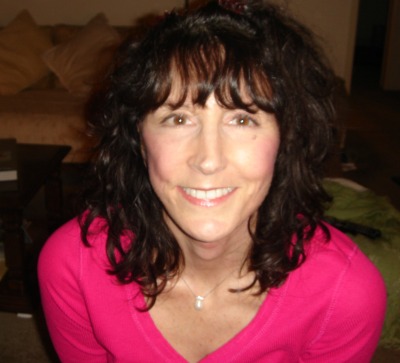 Off to John’s with me. Have a great weekend, y’all.