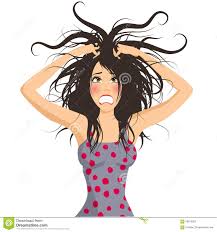 No, this graphic is not really intended to represent me. I don’t have her boobage. But this is how I’m feeling lately. It’s good stuff — lots of work — but it’s stressful.

I was already busy with work, but last week, a client I hadn’t heard from in at least a year burst out of the woodwork and slammed me with projects. And informed me that there are many more to come. Meanwhile, they sent six documents and wanted the first two ASAP.

Two things I’d forgotten about this particular client. One, they want everything yesterday. And two, they produce online medical courses… complete with graphic and gross photos. You guys know how horribly squeamish I am. Do you know how hard it is to focus on dry medical copy when it’s surrounding a closeup of an ulcerated foot??

However, I know this is nuts, so Tuesday I did take a break to see Steve for a couple of hours. He was stressed out over his own work situation, and I was tense and preoccupied — we thought perhaps we might skip playing. But of course, after a few minutes of relaxing and talking, our natural instincts kicked in and we got down to pleasure.

I so welcomed the stress release; it was like blowing steam out of a pressure cooker. Yeah, I know, a lot of you don’t know what those are. Do they even make pressure cookers anymore? I remember my mother having one. I never understood how they work or why they were used; I just know that you had to watch them carefully, because if you left them unattended, they might explode, and then whatever you were cooking in there decorated the entire kitchen.

Of course, since time was of the essence, Steve decided he needed to choose an implement with the most bang for the buck. I rolled my eyes when I saw what he went for: the dreaded Lickin’ Stick. Have I mentioned lately how much I hate that @#$%ing thing?? 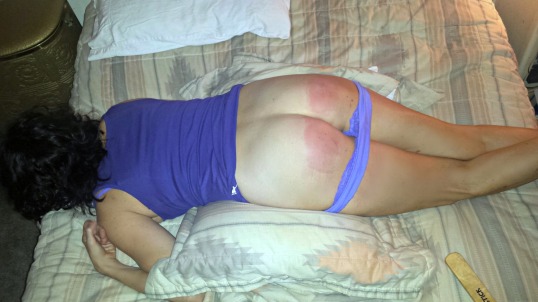 There it is, peeking out in the right corner of the photo. I swear, if I had a fireplace, I’d reduce that thing to ashes.

Ah… but you all see through me, don’t you. You know I’m just bitching and moaning. When all was said and done, I was a happy girl.

Well, for a little while anyway. The stress came back. But the respite was nice while it lasted.

Anyway, kids, I don’t know how much posting I’ll be doing in the next couple of weeks. The Shadow Lane party is coming over Labor Day, so once August is over I’ll have a couple of new adventures, but until then, posts will probably be brief. My readership is way down, and I’ve come to accept it. Things just aren’t the way they used to be, especially since Chross has stopped doing Spankings of the Week. I used to average between 1000-1500 views per days, skyrocketing to nearly 3000 if I was Chrossed. Now I’m lucky if I break 500. Such is life.

And now I must get back to work, so I can head out to John’s with a (relatively) cleared deck. Have a great weekend, y’all. 🙂