It’s true. I have been toying with the idea of restarting this for a while now. And I’d keep deciding not to, because I felt a little silly after making such a grand exit over a year ago. So why am I back?

Because I still have things to say. I don’t know who will want to read them, but I need to express them. I need a place to call mine. Facebook? Forget it. That’s mostly for playing Scrabble/Words With Friends and a few other vanilla odds and ends. Twitter is fun and I’m very active there, but one can only say so much with 260 characters. FetLife? Meh. FetLife is a mixed bag these days. There are, quite literally, millions of people on there, the attention spans are short, and you never know how your writing is going to be received. Sometimes, it strikes a chord and you get lots of loves and comments. Other times, no one notices. And then there are the times when, if you say something controversial, you swat at a hornet’s nest and bring a fuck-ton of sting down on yourself. FetLife can be a fun, playful place to connect with kinky friends… and it can be a minefield. Here, I have a bit more control. Here, I can fully be myself and know that (hopefully) the people reading like me and want to see what I have to say.

So what’s happened in the past year and two months? Everything and nothing, I suppose. Life. John and I will be together twenty-two years next month. He is still navigating the Nine Circles of Hell with his job, and that’s a long story unto itself, but I’ll shorten it by saying that he’s doing the best he can, and is determined to stick it out there and take their money and his pension. Health-wise, the news is good; he is the strongest he’s been in years. His heart is doing well; it’s been three years since his surgery. He walks a lot and keeps fit. He got a device for his sleep apnea, so he is now getting the rest he needs. I still worry about him all the time, and it’s still stressful hearing about the daily BS he has to endure at work, but overall, I’m breathing a little easier.

Scene-wise, we still do our two parties a year. I wish we could do more, but my distaste over traveling hasn’t changed and we are being very careful about spending money, because who knows what the future will bring. I had pretty much retired from doing videos at the end of 2016, but a couple of months ago, Alex Reynolds got a special request from one of her clients for a custom video with me in it. Couldn’t say no to that! It was a joy to shoot again, with her man Paul Kennedy, one of my favorite tops.

This will be released on the Northern Spanking site, but I don’t know when. And speaking of Northern, around the time we shot this, they released a video I’d shot with them in 2016. Paul plays my husband, a filmmaker… and I just happen to be a film critic. Who trashes his latest production. Small wonder the clip is called Critical Erica. 😉 Here is a fun shot of the pullover — note Paul’s grim determination and my “righteous indignation” face. 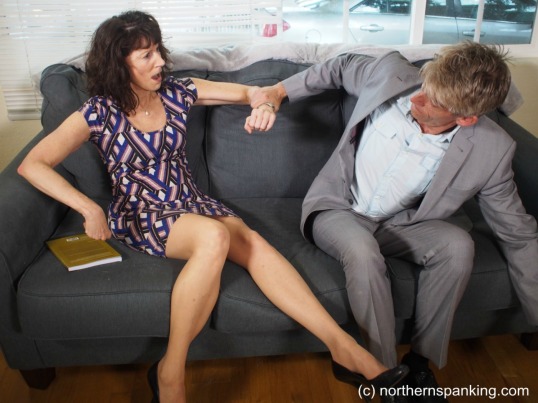 What else… I still get stupid correspondence. Today on Twitter, some weird guy kept insinuating himself into my conversations with stupid irrelevant comments, and then liking and retweeting his own comments! #BLOCKED  People still ask me scene questions, and I thought perhaps restarting this blog would make me more accessible. And let’s face it, I’m still a grumpy pain in the ass and like to rant about stuff, so this will be my outlet once again.

I didn’t order this coffee cup for no reason. 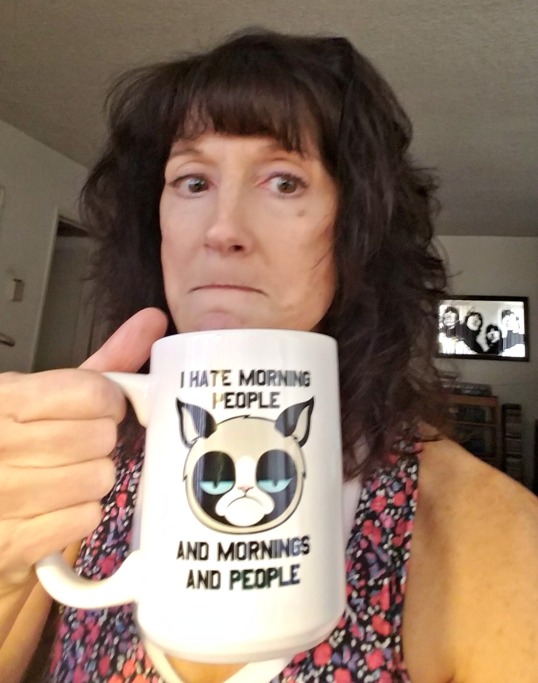 One thing I am not going to discuss here? Politics. I made that mistake before and I will not do it again. That is what Twitter and Facebook are for. I want to keep this space on point, especially since I’m entering a different stage of life now and writing here will help me process things.

It is not easy being an older female bottom in this scene. I am well past the age where I can pull off being a Little or a Middle. Not that I ever felt comfortable in that head space anyway. When I was in my late 30s, I let friends dress me up as a schoolgirl and I went to a party like that. But instead of feeling cute or sexy, I just felt… foolish. It’s simply not me.

I get the appeal of Littles and Middles, I truly do. What’s not to like? They’re cute. They’re adorable. They’re playful and fun. They wear cute clothes. And they get a lot of attention and care-taking. I am a Responsible Adult. I am fiercely independent and don’t like asking for anything. I have never wanted a Daddy; I’ve always been attracted to younger men, so hardly a Daddy image. (Those of you who have read my book might remember the story of 32-year-old me and my rather torrid infatuation with my 22-year-old coworker.) I am not comfortable with appearing needy.

And yet, I am. Sometimes, dammit, I just want to be taken care of. I want to be spanked, cuddled, kissed, pampered. I want attention. And I don’t want to have to ask for it; I want it to happen organically. But what comes more easily to a Little or a Middle is not so easy for a Very Much Grown But Still Vulnerable Person. (What the hell would be a name for that, anyway?)

When I was gathering my thoughts for what I was going to write, random memories of past scenes and tops were floating through my mind. I remembered a time about ten to twelve years ago, when my then play partner and dear friend and I were talking, for whatever reason, about childhood books, and he was shocked and appalled that I had never read The Little Prince. I don’t know why I didn’t, since I was a voracious reader as a kid and had read everything else that was popular, but I guess it slipped through my awareness. Anyway, the next time he came over, he brought me a copy. I was having a hard time that night, emotionally, as I recall; I don’t remember why. After we played and I had had a tearful release, he stuck around until I’d gotten undressed and he got me settled into bed. And then… he got on the bed with me, and read to me, from The Little Prince. I didn’t ask him to do that. I never would have thought of asking him to do that. But in that moment, it felt so soothing, so loving. I felt like someone else was taking over my cares for a while. I could fall, and he’d catch me. Because he wanted to, not because I asked him to. He just knew. What a sweet moment that was.

Because sometimes, adulting blows. Sometimes, life is fucking hard. And this is my escape. This is how I feel cared for, protected, loved. This is where I get to be that oh so bizarre and twisted and delicious combination of sexy adult woman and vulnerable, childlike person. I’m still kicking ass. I’m still working out. I’m still assing hands. 🙂 I’m tough. But inside is another story.

So… as I carry on, trying to figure out my New Normal and how to get my needs met, how to deal with insecurities and all the bullshit that comes with ageing, I hope you guys will stick around. Relate. Comment if you want. I don’t know how often I’ll post; when the spirit moves me and the muse bites, I guess.

It’s good to be back.