Catching up a bit

Aside from the op-ed post that I copied and pasted last week, I haven’t written for a while. Couple of reasons: one, I’ve been too freaking busy with work. And two: what with all the godawful stuff going on in reality, it felt somewhat disingenuous and forced to post about happy spanky stuff. But life goes on. So I figured it was time to update just a little.

In the past couple of weeks, we’ve had two birthdays — John’s and mine. I had a bit of a struggle with mine, as just a few days before, my play partner and I had officially ended things and I was dealing with residual sadness. But John went all out to make it a happy time for me, starting with flowers a week early and then taking me to Walt Disney Concert Hall for the L.A. Philharmonic on the actual birth date. I’d never been there before, so it was quite the adventure. The architecture of the place is pretty bizarre (oh hell, it’s just plain ugly), but the auditorium itself is breathtaking and the acoustics are perfect.

Full house at the Concert Hall:

We got all dressed up, and later went out for a nice dinner. It was a lovely birthday.

I got some cool presents too — lots of Beatles stuff! A Beatles clock from Lily Starr, a HELP! placard from Alex and Paul, and coffee table books and a poster from another friend (I’m not sure which name to use for her, so I’ll leave that blank).

Last week, I got to have a fun little adventure. Alex contacted me and said one of her clients wanted to do a double session with her and me. I’ve shot custom videos for her, but had never participated in one of her sessions before, so I was game. Her client was from out of town and had booked up a bunch of sessions with several of her friends, so mine was in the middle of three last Wednesday. I hadn’t seen Alex since Shadow Lane, and Paul since a couple of months before that, so it was great to see them again, even though I didn’t get to talk with them too long. Alex’s client was into role-play and we did two half-hour scenes; he turned out to be a lot of fun and I enjoyed myself a great deal.

Even better? Catching up with Alex, I finally got pictures from her birthday party last July!

Before this photo was taken, I had been trying to launch myself onto a floating pool swan… and fell over off the side of it, getting thoroughly dunked. I blame my innate clumsiness, and the vodka-spiked lemonade might have had something to do with it also. Anyway, I was hanging in the background while Alex was taking pictures, and she called out, “Erica, get in the picture. I don’t care if your hair is wet!” So here we are: Alex, me, Ulf, Lizzy McAllister, and Maddy Marks. Happy bunch! 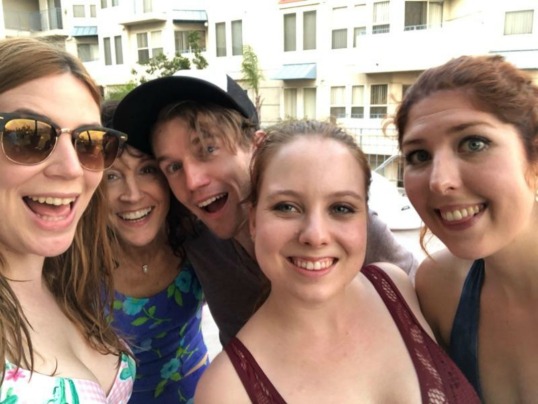 And here’s a really nice shot of John and me, with downtown L.A. behind us:

Fun times. Anyway, work-wise, I dealt with famine for the first half of this year and now I am feasting to the point of gluttony. I get stressed when I feel like I can’t control my workload, but I’d rather be busy than not. Other stuff keeps coming up, appointments need to be made, but I’ll take care of them one at a time in the order of importance. One friend has been asking to meet me for coffee for the past several weeks, and I’ve put him off so many times, apologetically, that I finally decided I’m never going to find time, so I just have to make time. We’re meeting up tomorrow afternoon and catching up. Oh, and I have to break away on occasion to work out.

I miss playing. A lot. But I suppose the other advantage of being busy with work (other than the money) is that I don’t have much time to dwell on it. Even if I did have a play partner right now, I don’t think I’d have time to play with him! (sigh) So, that’s all on hold for now. Life feels a bit unbalanced, but things have a way of righting themselves. I am just going to plow on and hope for the best.

13 thoughts on “Catching up a bit”