How are we doing, kids?

I wish I had something interesting to say. But here in Pandemic Paradise, each day is the same. Get up. Dress. Go online. Work. Take a break to exercise. Do some more work. Return texts and emails. Eat something. Work a bit more. Watch TV. Undress. Go to bed. Rinse and repeat.

The only time I leave my building is on Saturday when I head out to John’s to bring him groceries. To get my own groceries. Or for absolutely necessary errands, of which there really aren’t that many right now. I tried for two days to resolve a banking issue over the phone and online and was unsuccessful. So I made an appointment to take care of it in person at my branch tomorrow. Wearing a mask, of course.

And hey, look, I cut my own bangs. Haven’t done that since I was about five years old.

No play, of course. Can’t even go on a pre-play coffee date these days. I miss it. Definitely a First World Problem in the face of death and unemployment and financial ruin, but what can I say. It’s wired into me and I crave it.

Many parties, small and large, have been canceled. Joe is staying positive and hoping Shadow Lane/Lodge can still happen over Labor Day. I’m skeptical. But that’s four months from now. Hope springs eternal. If we’re all still living, that is.

My stepmom turns 89 today. I can’t see her to take her to lunch like I usually do, but I sent her flowers. It’s a crap time to be having a birthday, but I wanted to brighten her day if I could. She loved them.

My dear friend Jay sent me a care package a couple of weeks ago. It was completely unexpected and I had no idea what was inside. As I opened the large box, the first thing I saw was a jumbo-sized canister of Lysol wipes. There was hand sanitizer included too. I bawled like a baby.

Another friend had a neighbor knock on her door on Easter Sunday. They backed away when she came to the door, but on the doorstep was a plate filled with Easter dinner, some candy, and half a 12-pack of toilet paper, wrapped with ribbon. This sort of situation tends to bring out the best among us. ♥

Unfortunately, it also brings out the worst. Yeah, I understand wanting to get back to normal life. But the stay-at-home rules aren’t a punishment cooked up to make us miserable — they are to keep us safe. So, to all those ignorant, belligerent little @#$%s out there protesting the quarantine, blocking traffic, carrying your stupid misspelled signs and Confederate flags, spreading your germs everywhere, and whining because you can’t play golf or get your hair cut — do us all a favor. Please feel free to spread all the virus you want among yourselves. Have at it and have an orgy for all I care. Just stay. The Fuck. Away from those of us who are following the rules and want to stay alive. 😦

And for those who attend this thing, or others like it (bring your children?? Jeezus Effing Christ) — oh, so many things I’d like to say. But I will refrain. I’ll just say one thing, paraphrasing Forrest Gump:

“Stupid is as stupid DIES.”

I have just been informed that the above rally poster was a hoax. (Some hoax!) Whatever, thank goodness. However, the picture below is quite real. I stand by my statement about stupid.

For those who can still play, please have fun, escape a bit and blow off some stress. We need to stay strong. We need to find our moments of fun, of joy, of abandon, of release.

And for those who can’t… well. There’s still plenty of chocolate out there.

Or ice cream. And remember, pints are for lightweights. 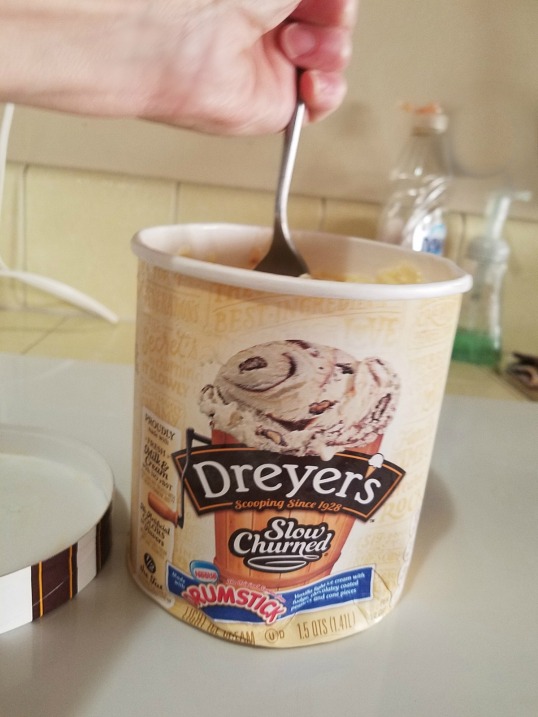 Yup, I’m still here, kids. How is everyone? How are we all holding up in this insanity? I don’t know about you, but it’s the little things that are helping to keep me sane. Things that make me laugh. Or that give me a tiny sense of empowerment in a sea of powerlessness. Hence this post.

Some things never change. Even in the midst of a pandemic, I still hear from the pervs. I’m still getting inappropriate messages. Someone asked why I haven’t done a CHoS lately, especially since I had so much material. My answer was that I really hadn’t been up for it. But then something happened this week that was different.

You guys know that in all the years I’ve been doing this, I would write (on here) what I would like to reply to the perpetrators. It was just fantasy. I never actually replied to any of them… until now. For the first time this week, I wrote back to one of them. I let them @#$%ing have it. And it felt gooooood, dammit.

On FetLife, there are “relationships” you can have with others, including sisters and brothers. I have several sisters on Fet. One of them is Alex (different Alex, not Alex Reynolds, although she’s my sister on there too). This is a very sweet young woman whom I’ve never met in person, but I’ve been in correspondence with for a couple of years and have grown to feel very protective over. Anyway, the other night, she messaged me, warning me about some creep on FetLife who was following a bunch of women and who had written very rude things to her. She then showed me a screen shot of their conversation and I saw red.

He’d written this arrogant little note to her, saying he wanted to be her dom, how much fun she could have with his “Big Dick Energy” (yes, really), and so forth. I would have not answered at all, but she politely wrote back, “No thank you.” It should have ended there. Instead, he wrote back, launching into Uber-Dom speak, saying, “That’s ‘no thank you, SIR,'” and a bunch of other drivel about her bad manners. He ended it by calling her a really nasty name.

She blocked him, and that would have been the end of it. But nooooo. The creep saw that I’m her sister, so he then proceeded to write to me!

So… I sent this back to him.

I knew I’d probably opened up a huge can of whoop-ass, but I didn’t care. If he wrote a bunch of nasty stuff back to me, I’d report him.

A few hours went by and nothing. Then later that evening, I heard back from him. I opened the message, bracing myself for abusive filth. 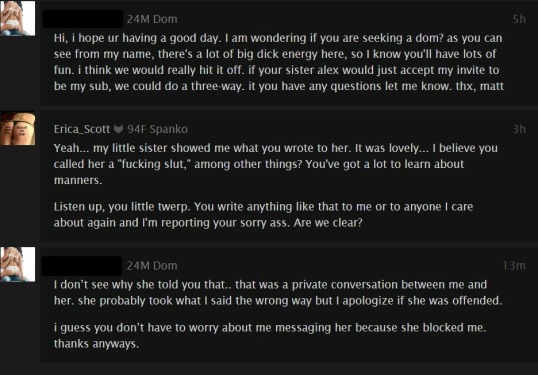 LOL — really? She took it the wrong way? What other way was there to take it, you Troglodyte? Still, I was shocked that he didn’t send me back a lot of righteous indignation. Guess I scared him, the little wuss. Didn’t hear from him again.

Of course, don’t think I initiated any sort of personality overhaul or anything. Next day, I found out he’d written to Alex’s “brother” and top, Zack, telling him how rude she is and how he should “tighten the leash” and punish her for her disrespect. Jeeeezus.

*groan* I wish Zack had also ripped him a new one. But he’s nicer than I am, so he tried to reason with the guy instead. Didn’t get anywhere. Oh, well. Out of my hands now, for sure. No regrets on my end. Like I said, writing that to him felt damn good. It was like striking back after years and years of getting shit like this. Empowerment!

Anyway… yeah, I know this is nothing in the overall scheme of things right now. But like I said, it’s the little things. The mini-laughs, the small victories, the fleeting moments of good feelings among the fear, the anger, the uncertainty.

I work at home, so I basically hole up all week in my apartment and stay there. I use the gym equipment in the apartment building, wiping it down first. Grocery shopping has been quite the adventure, although I have discovered the odds of finding things are better if you go early. I went at the ungodly hour of 7 a.m. this week and actually scored some toilet paper and antibacterial wipes, which I hadn’t seen in weeks. My bangs are growing into my eyes and my gray roots are spreading. I miss all the little things we take for granted every day.

John is an essential worker, so he is still going to the office three days a week, but he’s in an isolated office with no one else and all communications are done via phone and teleconferences. He works at home two days. My biggest terror over this whole situation is his vulnerability, what with his heart condition and compromised immune system. If I catch Covid-19, I’ll probably get over it. If he catches it, it could kill him.

In an effort to minimize his public contact, I go to his place on Saturday morning. Beforehand, I stop and buy all his groceries, as well as food for us for Saturday and Sunday. Then I head to his place, delouse everything and put it away, and we hunker down there until I go back home. We decided that was far less risky than his going out and buying his own necessities. Needs must and all that.

So. Everyone please stay safe. Stay the @#$% at home as much as you are able to. Turn off the 24/7 news; it’s not good for your mental health and well-being. Stay in touch virtually with your friends. And hang in there. Whatever you are going through, please hang in there. Somehow, we’re going to get through this goddamn pandemic, eventually. ♥ ♥ ♥