Archive for the category “Dana Kane”

Some of you who have been with me for a while may remember, back in 2011, I was shooting for a site known as Spanking Court. SC, and its sister site, Sternwood Academy (about a naughty girls’ school) were the brainchild of Cali Katarina, who along with her Dom and partner, ran Alpine Sierra Studios.

Spanking Court was wonderful fun. Dana Kane and Michael Donovan were the Bailiff and Court Disciplinarian, respectively, there was a strict judge, and the court saw many defendants during its time, including Snow Mercy, Nikki Rouge, Samantha Grace, Alex Reynolds, Ten Amorette, Christy Cutie, Maddy Marks, and lots more. I was lucky enough to do a six-episode story arc, which started out kind of different from the rest of the “cases”: I was there to try a sort of physical/psychological experiment, with court-assigned spanking as treatment for depression. However, I quickly ran afoul of the Court Disciplinarian; I was ticked off by his coldly professional demeanor (and his insistence on calling me “ma’am”), and my “treatment” morphed into a clash of wills where I did my best to get his goat. Of course, everything I said and did ended up backfiring on me. But in my final appearance, which was all about resolution and closure, I got to have the last word, in a most unexpected way. 🙂

Me, smirking, as usual: 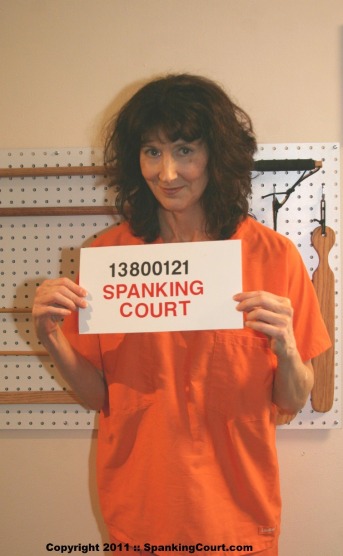 When Alpine Sierra Studios ceased production a couple of years ago, the massive collection of SC and Sternwood videos were no longer available for purchase. Which I thought was a terrible shame and a waste — they’d put in so much work, so much talent had been involved, and there was a lot of fresh, creative content. I’d had the time of my life working with these people and I hated the fact that the evidence of those good times had disappeared.

Until now! The entire library of Spanking Court and Sternwood Academy videos is being restored and reissued, by none other than Dana Kane and Michael Donovan, and distributed through both their Clips4Sale stores. There is a lot of material and they are putting up a few clips at a time, so it will be a while before the collection is complete once again. But in time, it will all be there. I’m so jazzed about this! So happy to see all this good work available once again.

These videos were the real deal, with authentic costumes, sets, etc. To read more about them and get links to the sites where you can buy them, check out this post on Dana’s blog.

Hope everyone had a nice weekend.

"When Danny Met Erica" has a home!

Happy Friday the 13th! I hope everyone has good luck today. I know that my fellow Chrosslings and I did. 🙂

For those who have been following me for a while, you know about the video Danny Chrighton and I produced four years ago, called “When Danny Met Erica.” It was our baby, written and done exactly the way we envisioned it. For a while, Shadow Lane was distributing it for us, but they have stopped the practice of distributing videos from other producers. So the video was homeless for a while.

I’m proud of that film and I wanted it to be available somewhere, dammit. I tried to open a Clips4Sale store, but there was just too damn much rigmarole involved. Scan and send them my driver’s license! Scan and send them one of my bills, for heaven’s sake. Ten-clip minimum to start a store! Screw that noise. So instead, I went to Spanking Library. Granted, they don’t get anywhere near as much traffic as C4S, but it’s OK.

Tony from SL was kind enough to break the video into three clips for me, and so I opened a new store and uploaded the clips yesterday. Here is my official Spanking Library store: Erica Scott clips. Three clips isn’t much of a store, I admit. But I really don’t have anything else to put on there at this point. ST and I have the fun stuff we’ve shot over the past year, but I’ve already posted everything for free, plus they aren’t quite the quality for selling, I don’t think. But that’s all right; really, I just wanted WDME to have a place where people could find it. I do love that film, and I’ll always be glad that I finally got to shoot with Danny. We wanted that for so long.

So I hope anyone who hasn’t seen WDME yet will check it out! Lots of good spanking action — OTK, strapping, hairbrush. And great chemistry, which we had from the first time we met.

And speaking of new clip stores: For those who enjoy F/M video, there’s a newbie in Clips4Sale — Dana Kane Spanks. She has recently started shooting premium video and has a small selection of clips to which she will be adding lots more, including some F/F content too. Please drop by and show her some love — she’s fun to watch!

So, you guys remember how last week, I discovered ST’s paddle peeking out from under the bed, and I fessed up to finding it rather than letting him think he lost it?

He came in tonight, claiming I hid it from him and I kicked it under the bed! Well, I never! I most certainly did not. Really, I didn’t. So I protested, and then he backed down, saying, “You’re right. I apologize. You’re such a good girl, I shouldn’t spank you at all.”

As you can imagine, that didn’t last very long. He couldn’t stand it.

We’ve been playing in the bedroom lately, since my next-door neighbor moved out and so the bedroom on the other side of the wall is temporarily empty. I must say, it’s nice to be able to make a bit of noise and not shove my face into a pillow all the time.

But you know, he still didn’t believe that I was so accommodating, announcing to the world that I’d found his paddle.

“I was just trying to be nice!” I squawked. And you know what he had the nerve to say to that? “Oh, please. I’ve never known you to be nice!”

HUMMMMMPPPPPPPHHHH! Excuse me?? Me, not nice? I am a fucking living doll, dammit.

I even went and got him a glass of water, bringing it in and saying, “Here you are, Your Majesty.”

He liked that, and suggested I lengthen the honorific to Lord God Your Majesty. I counter-suggested something he didn’t like, for whatever reason, and we were off and running.

That’s just an expression. There was no running. Although my legs were pumping.

He barely used his hand tonight — said it was hurting him. Good thing he had a bag of toys, huh? Right?

I wish, just once, I could keep some color for more than a minute or two. It looks like he barely patted me, doesn’t it? I guarantee you, he did a lot more than that. Lucky me. 🙂

Thank you, sweetie. You cheered me up a great deal tonight.

Earlier this year, I met and played with The Villain for the first time, here in my apartment. I knew he was involved with Dana Kane, but she and I hadn’t met, nor had we had any correspondence. So I thought it was mighty cool of her to be OK with his coming over to play with me, a stranger. Believe me, I do not take that for granted. I know it’s kind of ridiculous — me, a threat to anyone? really?? — but in the past, I’ve dealt with jealousy/insecurity that bordered on the psychotic, so I am hyper-cautious.

So after he left, I wrote her a note on FetLife, just to say hello and thank you for letting me “borrow” V for the afternoon. I was respectful and even used a proper honorific. Later, she wrote back, saying “Please, just call me Dana” and that they were both overjoyed when they could find someone sane to play with. (Sane?? Me? uhhhh… ok) She then added, “He came home grinning like the Cheshire Cat, so thank you.”

Damn, I thought. I think I’m really going to like this woman. And I did, the minute I met her in person, in May. When I went to shake her hand and she gave me a great big hug.

Wishing you lots of love and special attention and cake and presents and anything else your heart desires, you gorgeous woman. 🙂

Glad you all enjoyed the “Hollywood insider” post. I’ll try to come up with a few more of those.

All over the map today

The pre-party jitters have settled in for the duration. I probably should have passed on the caffeinated coffee this morning. Besides being keyed up over SL, I’m still on a high from the shoot last week and my book coming out, so there is a bit of overload happening. Deep breaths, Erica. I know I’m setting myself up for a spectacular drop, but I’ll worry about that later.

The preparations are in gear. Already got the pedicure (I don’t bother with manicures; my fingernails are hideous, so I just cut them short) and the haircut, and banished those pesky gray hairs. I tore my closet apart yesterday, trying on outfits. Usually I buy something new for these parties, but this year, money is especially tight. So I’m recycling.

Today is laundry day and my last trip to the gym for a few days. Tomorrow will be a whirlwind of last-minute odds and ends. Yes, I know, I’m only going away for three days. I’m not moving to Siberia. But this is what I do.

Anyway, I have a bunch of shout-outs today. The wonderful Zelle is at it again, singing my book’s praises on her blog. I nearly fell over in my chair laughing when I saw her clever Photoshop of me emerging from a coffee cup (go look). Thank you, my friend! What are your publicist rates? I owe you a bundle by now.

There’s a new book in the spanko world! The Spanking Writers (Abel and Haron) have put together an anthology of spanking stories from various writers, entitled The Spanking Collection. And here’s the best part: all proceeds from the book will be donated to cancer research. Please check it out.

Sending out my best wishes and warm hugs to the beautiful Pixie, who is home recovering from surgery. She’s had a tough year and I hope things look up for her very soon. I really am fond of that girl.

This week, The Villain and Dana Kane are relocating to Las Vegas. Las Vegas’s gain is definitely L.A.’s loss! (sniff) But they have both assured me they will be back here regularly, including for Spanking Court shoots. Last week when I told V, “I don’t want you guys to move away!”, he laughed and said, “Ah, we’re just over the hill!” Over the hill, he says. I wish I were so laid back about a 4-5 hour drive! Anyway… I wish them the very best on their move.

Last but definitely not least, that wonderful UPT (Ultra-Popular Top) Richard Windsor offered to shoot a little book promo video with me at the party, to put on Spanking Tube. You’ll see a very different Richard from the one who shot the interview with me last year — a lot less of him, to be specific. What is it now, Rich — 80 pounds down? Somewhere around there. 🙂 Fabulous.

All right… must go be productive.